Hello readers – I’m really glad to talk to you today about a book that is one of my favorites (it is on my top ten list) for superhero RPG sourcebooks. The book’s name is Century Station and it is a standout setting for superhero roleplaying; this is not your typical bland city that you see in so many superhero RPGs… no, Century Station is a great location with a lot of problems for player characters to solve!
Here’s where I give you, gentle reader, full disclosure: I’m a big fan of author Bill Coffin’s work on Heroes Unlimited and Rifts, and Century Station is no exception. Bill’s a very creative and talented writer, and it is a pleasure to finally get some time to devote to this long-overdue review.

The City of the Future

Century Station is a setting for the Heroes Unlimited RPG. However, the majority of the book’s content works just fine regardless of system – the ideas, characters, enemies, situations, and locations are all fantastic for just about any superhero RPG on the market. 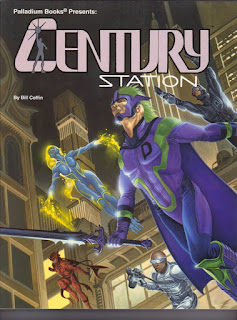 The book starts out with a detailed look at the city’s history. In a nutshell, Century Station started out as a high-tech utopia, led by a particular scientist into various experimental fields like cold fusion. It was granted the status as an autonomous district (similar to Washington, D.C.). The city featured many cutting-edge technological advances, including supercomputers, powered armor, robotics, cybernetics, flying cars, and so forth. Many of these research facilities took shortcuts in a race to dominate the market, creating all kinds of “origin stories” for superheroes and supervillains alike.
However, it turned out that the scientist driving this technological revolution was actually an alien fugitive from an advanced civilization. An intergalactic police force arrived on the planet to take this criminal into custody, and the revelation of the scientist’s true nature caused a huge economic downturn in the city. All of a sudden, Century Station was a city with tons of warehouses full of advanced tech and failing businesses everywhere. Unemployment and crime shot into record numbers, and the supervillains took advantage of this opportunity to build massive criminal empires of their own.
The rise in supervillain activity led to a massive conflict between the city’s authorities, its superheroes, and a criminal mastermind named Iron Mike that ended tragically. In an event that came to be known as “Bloody Monday,” Iron Mike was killed and his syndicate broken up… but at a heavy cost. Most of the city’s superheroes were slain in the conflict, and casualties amongst the regular authorities (the police and emergency services) were high.
In the aftermath of the devastation of Bloody Monday, the US President issued an ultimatum to the city: restore order and dramatically reduce crime in the next five years, or face serious Federal measures and intervention, including the declaration of Martial Law.
With the threat of losing its special status as an autonomous district – not to mention the idea of US tanks rolling down the streets of this once-thriving metropolis – the government of Century Station made some radical choices to try and achieve their goals. This includes sanctioning superheroes as agents of the city’s law enforcement in a bid to leverage superheroic adventurers for the benefit of the city.

A Compelling Reason to Adventure

For me, it is the President’s mandate that really drives the entire setting. I love the fact that the setting really gives superhero teams a reason to get out of the typical habit of “we sit on monitor duty at the Hall of Justice waiting for a trouble alert.” Instead, superheroes in Century Station have to be proactive… they have to get out there into the nasty parts of the city and hunt trouble down before it gets out of hand, because if another mastermind rises too high and too fast, Century Station could be doomed.
The movers and shakers in the city are well aware of this, and there are tons of cool adventure seeds and plot ideas revolving around the power blocs in Century Station and how they want to address the issue of the mandate.
There are even factions within the superhero community in the city. One faction is led by CHIMERA, an over-arching law enforcement agency put into place by the city’s government. CHIMERA uses sanctioned superheroes as law enforcement agents and they have their own superteam, the Centurions, on their side. Unfortunately, CHIMERA has its own issues with authority, corruption, and a particular vision for the city that clash with many of the other factions.
A second faction is the unsanctioned heroes – superheroes who battle crime outside of CHIMERA’s restrictive rules and regulations. The unsanctioned heroes are often far more concerned with protecting the citizens of the city than with “cleaning up the streets,” (a popular mantra of CHIMERA), and clashes between them and the sanctioned superheroes are common.
There are other groups as well – groups that are anti-alien in nature (due to the revelation of the scientist’s true nature), groups that want independence for Century Station, groups that serve the city’s more wealthy and influential “Council of Industry,” and of course, a ton of enterprising supervillains all scheming to take Iron Mike’s place as king of the hill.

A City for All Heroes

Century Station offers a unique setting that appeals to nearly every single style of superhero you can think of. Many other published settings work well with the “classic” superheroes, but don’t have a lot of room or support for characters who are aliens, mutants, or rely heavily on advanced technology. Those that do don’t often showcase options for low-powered street-level superhero adventures alongside the more epic “Justice League” style. Century Station, however, has it all sewn up brilliantly.
Alien heroes can either be fugitives from the intergalactic enforcement attempting to redeem themselves, or agents of that same organization on Earth trying to atone for the unintended consequences of removing the scientist from the city’s equation.
Technological heroes have their pick – tons of cyberware, power armor, and robotics were built up during the city’s boom years. All the short-cuts taken resulted in lots of accidents, and any of these could expose a potential superhero to all kinds of energy, radiation, or serums. Ditto for mutants!
Magical heroes could be drawn here to the growing conflict between sanctioned and unsanctioned heroes, or see something noble in the city’s attempt to rise from the ashes of Bloody Monday.
And this is all just the tip of the iceberg – the book has plenty of guidance for involving heroes from nearly all origin types. 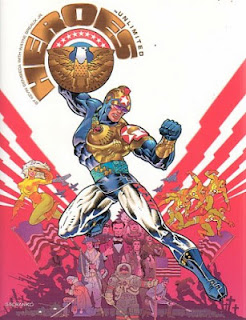 After describing the city’s history and the major players in Century Station, the book takes time to go through each borough of the city in detail, from the richest and most advanced regions to the near-cyberpunk-wasteland areas devastated by the economic crash.
Next, the book details the “Who’s Who” of the city, from its struggling Mayor to the shadowy figures of the Council of Industry. The forces of CHIMERA are also showcased here. Wayne Breaux turns in some of his best artwork (although the Sector 10 Agent still has very screwy proportions), and overall the artwork in the book is of a very high quality.
The police department, the media, and various political groups of Century Station are all detailed here as well, providing tons of great ideas for contacts, allies, or enemies of the player characters.
Next, the book goes over the Centurions (also featured on the book’s cover), the city’s most lauded superhero team. This group is interesting and has some good ideas, but I feel that Bill is more showing off what player characters can become, although the team is still useful for a GM to use as a guideline for how the city handles sanctioned heroes.
More of Century Station’s superheroes are presented in this chapter as well, with a few standouts being the Iron Brigade (an all-power armor team of unsanctioned vigilantes) and the Victorian, a Question-like vigilante who fights with a swordcane, monocle, and bowler hat – very much a masked adventurer version of John Steed.
The rest of the book is taken up with a ton of adversaries and bad guys to use in your superhero campaign. The triad assassins and the Shadow Margin – a criminal organization led by an ancient immortal Chinese sorcerer – are the most interesting of this group.
Finally, the book closes with 101 adventure seeds to help the GM come up with ideas for things to do in Century Station.

Century Station is a really well-designed sourcebook to present a GM with a ready-made city for any superhero RPG. It’s greatest strength is the five-year countdown and the way that it encourages players to be more pro-active about crimefighting. It’s greatest weakness is probably that the included heroes and villains are largely lackluster. However, this last issue is actually fixable with the book’s sequel – Gramercy Island. This book is a followup to Century Station and focuses on a supervillain prison, and includes a ton of bad guys. All in all, the reason to buy Century Station is for the fantastic setup, the great incorporation of different superhero origins, and the sweet, sweet situation of the city’s political and social scene. Absolutely check out this book if you’re looking for a fresh take on a high-tech city for your superheroes to patrol.