When I was working for Fantasy Flight Games, Gen Con was described as “the Superbowl of the industry.” I think that’s a fair assessment of the impact and importance of Gen Con to the gaming field—specifically for RPGs but also encompassing board games, card games, miniature games, and even interactive media like videogames. 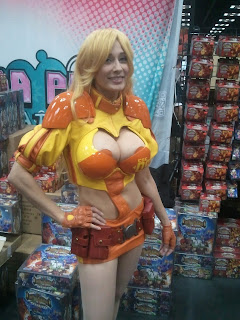 The lovely Marie-Claude Bourbonnais, cosplaying as Rin from Relic Knights. MCB made the costume herself!
Each category of games has their own “main event”—for board games, it is probably Essen Spiele. For Miniature Games, it is becoming Adepticon. Videogames and other media have Pax Prime and the San Diego Comic Con.
Gen Con, however, is like a delicious mishmash of those categories with a generous helping of tabletop RPGs ladled over and surrounding the whole.
I’ll admit it—I’m additcted to Gen Con. I’ve gone just about every year since 2000, and every year it’s one of the things I look forward to most. The things that I enjoy most about each year’s con are the friends I meet there, the events I get to enjoy, and the energy and inspiration that I bring home with me.

Gen Con always instills me with a fresh sense of purpose. Seeing all my friends, their accomplishments, and the brand new horizon for the industry never fails to get me all fired up about my own projects and assignments. 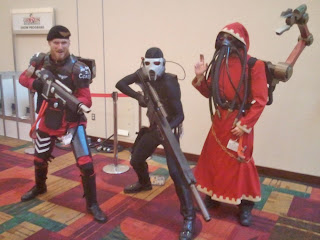 Some awesome cosplayers for 40K; a Warrior Acolyte, Vindicare Assassin, and a Tech-Priest.
There’s a sense of celebration and enthusiasm that simply can’t be contained at the show. Fans, retailers, authors, freelancers—we’re all alike in that Gen Con is a form of homecoming. It’s a place where we all belong, where our passions can run free (but not too free, or someone will call the cops).
The convention is also a great kick in the pants to anything I’ve been procrastinating or waiting on, and I can’t help but feel propelled to get more things done after seeing all the coolness on the shelf and being enjoyed by the fans at the show.
Even this blog post right here is an example. I came home and was ready to smash some writing! If you’re looking to get a boost on your motivation to get things done in the game industry, visit Gen Con and I guarantee you’ll come home jazzed to begin some serious work.

Gen Con is also where I meet a lot of friends that I see rarely… generally once a year, in fact! I’ve made a lot of contacts in the gaming industry, and I’ve been very fortunate to also have a lot of friends who are also either gamers or game industry professionals.
I’ve heard it said by some of my friends that “Ross knows everybody” at Gen Con. While this is not technically true (Sean Fannon has that honor), I do know a lot of people at Gen Con. Walking through the Dealer’s Hall results in me saying “Hi” to someone I know around once every five minutes on average. I’m not saying this to brag, but just to help express how much I love going to Gen Con and seeing all the people I know. It’s a good time to catch up, to shake hands, to congratulate them on their accomplishments… and, of course, to give them my card if they’re looking for a writer. 🙂 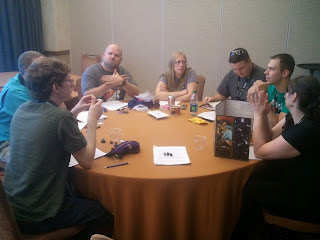 Lars makes the sign of the Aquila at the Dark Heresy game.
This year I spent a lot of time hanging out with my “partners in crime,” John Dunn and Jason Marker. The three of us are kind of like the Musketeers, once you get us together, anything can happen.
Special shout-outs for this year also include Sean “where’s the party at?” Fannon and Carinn “I’m a brunette now” Seabolt, Andrea Castellow, Randall “Leviathans master” Bills, Jason “I also liked Fields of Fire” Hardy, and Mack “I made a game about evil babies in 6 weeks” Martin. It was similarly awesome to hook up with my compadres at FFG and hoist a mug or two to the announcement of the new Star Wars RPG.

Gen Con is stuffed full of things to do. If you’re a fan of any kind of pop culture, you’re going to have a plethora of options for events during the entire weekend. In fact, things have grown so much that I’ve started calling it “the best /five/ days in gaming.”
This year, as with every year, I had a lot of fun in the events. I tried out the Dungeons and Dragons crossword and got the answer right with “Catoblepas.” I joked with the organizer that he should’ve had a harder word like “ixitxachitl” or “penanggalan.”
There were plenty of parties and celebrations at the Ram and (my personal favorite) Scotty’s Brewhouse. There were the ENnie awards on Friday night, which is quite fun—and Paizo cleaned house for another year with Pathfinder products. Good work, Paizo Team!
I attended the Fantasy Flight Games InFlight Report and learned what is coming up in the future for my old alma mater, and it was there that the big announcement for Edge of the Empire, the new Star Wars RPG was unveiled. This announcement was complete with stormtroopers and free copies of the beta game, so it was kind of a big deal! I helped a little with the skills and races, but unfortunately, most of my work was cut out of the Beta so… my name was left off the credits. (cue sad, sad trombone!)
Of course, the best events for me were the games.
I got to play in Jason Marker’s Savage Robotech game, which was a real hoot—also present was my friend Paul Algee, John Dunn, and Josh “Dead Reign” Hilden. This adventure helped codify a particularly distinct attitude that can be summed up thusly:
“Why? Because F&*@ Yeah Robotech, that’s why.” 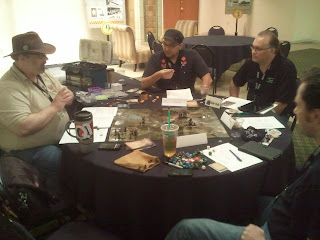 Behold the glories of Shaintar, presented by Sean Fannon (far left)
I also played a totally awesome game of Shaintar with Sean Patrick Fannon—as I’ve mentioned in his interview, Sean is a true game master, and this session was no exception. Shaintar has recently been released as a free beta, so I encourage you to go check it out.
I got to play a game of Leviathans with the developer, Randall Bills. Leviathans is a really fun ship-to-ship combat game that is unlike nearly anything else on the market. It was a complete blast and it is no surprise that Leviathans sold well throughout the convention.
Saturday, I played in a Dark Heresy game run by Andrea Castellow, featuring some old friends (Hi Lars!) and some new ones (like Teras Cassidy of Geek Nation Tours).
Late Saturday night I ran a game of Deathwatch using the “Traitor’s Dawn” scenario from First Founding. I call this my “podcast” game, since I had the D6Generation crew, Cody and John from Game On, and the Nerdherders all gathered at my table. It went really well and it was a great session.

When going to Gen Con, you’ve got to prepare. Even this year, when my schedule was really light, it was also very chaotic. I ended dropping the ball quite seriously for a Thursday night game of Deathwatch I was supposed to run for the Catalyst Game Labs guys, and I feel pretty crap about it.

In addition, there’s just so much going on at Gen Con, I never get to do all the things I want to do. I always end up looking at the program book a few days later and thinking “Man, how did I miss that?”

Next year, my advice is the same as my own intentions: plan ahead as much as possible!
Lastly, I want to give a special mention to the VIG program. This is a premium package that is well worth the extra cost. The amount of goodies given away to VIGs this year was mind-blowing, plus VIGs don’t have to worry about huge lines for registration, they have a place to store their bags for free, plenty of refreshments, and lots of special VIG-only events. VIGs also get to go into the Dealer’s Hall an hour early on Thursday, which is huge.
All in all, Gen Con is and continues to be a great show. If you’ve ever thought about going, I hope this account has helped you make up your mind—it is totally worth it!